We are proud to add a new brand to our portfolio: AJ Fernandez.

What you can expect: 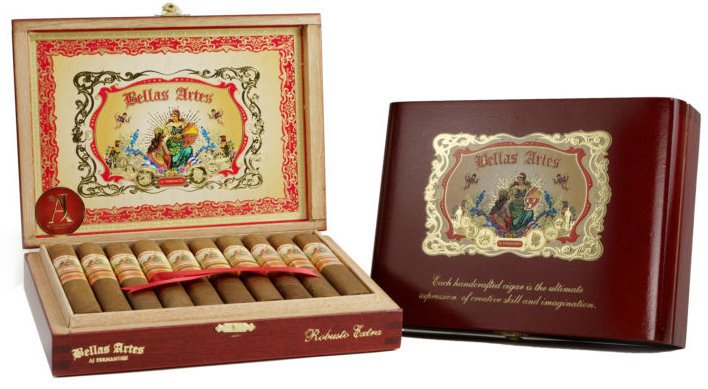 A.J. Fernandez's Bellas Artes brand first debuted in 2016. It showcases a hybrid wrapper that Fernandez refers to as "Rojita," which is a cross between three strains of tobacco: Connecticut 8212, Corojo '99 and Havana 2000. The binder is a Havana '92 varietal grown in Quilalí, a region of Nicaragua that has been producing black tobacco since the 1800s. The Nicaragua-heavy filler consists of tobacco from Estelí, Condega and Jalapa, however, Fernandez also uses some Honduran leaf and a bit of Brazilian tobacco as well. 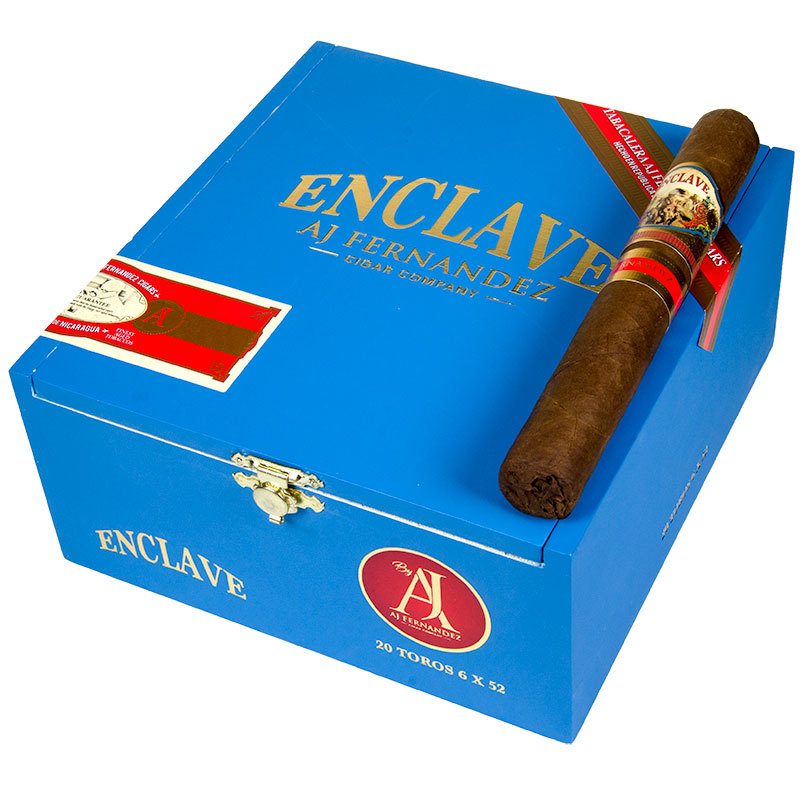 Inspired by a theme of brotherhood and camaraderie among cigar smokers, A.J. Fernandez Cigars, the company behind brands like New World and San Lotano, is introducing the Enclave, a new smoke that will officially debut at the IPCPR trade show. The art on the box and on the cigar bands depicts American Indians, which Fernandez believes is central to the theme.

An enclave is defined as a portion of territory within or surrounded by a larger territory whose inhabitants are culturally or ethnically distinct. According to Fernandez, American Indians represent one of the original tobacco enclaves.

"There is no doubt that there is a special bond shared among those passionate about cigars," said company founder A.J. Fernandez.

Made in Nicaragua at the large A.J. Fernandez factory, Enclave is a three-country blend of Cameroon binder, Nicaraguan filler (including the Piloto Cubano variety grown in Nicaragua) and an Ecuadoran Habano wrapper. The cigar was blended by A.J. Fernandez and his father Ismael

The beginning of AJ Fernandez’s San Lotano Habano cigar starts long before the birth of the man; in fact, the earliest recipe was shaped by his Cuban grandfather. Crafted using Old-World, traditional techniques, the cigars were heartbreakingly abandoned when the country was tumultuously torn apart. Fortunately for us, AJ has brought back the renowned San Lotano cigar for present-day aficionados to enjoy.

The new San Lotano Habano is a full-bodied take on the classic blend. The unique cigar is constructed with a blend of aged long-fillers from Nicaragua, Honduras, and the Dominican Republic and a Nicaraguan binder. Most importantly though, the San Lotano cigar gets its name and dark, distinct look from the rare, Brazilian Habano wrapper which is only obtainable by AJ Fernandez and one other manufacturer in the entire world.

Experience the closest thing you can find to a real Cuban cigar with the intense, full-bodied AJ Fernandez San Lotano Habano. Available in Grande Toro, Robusto and Toro, you can’t go wrong with this gem in any size. 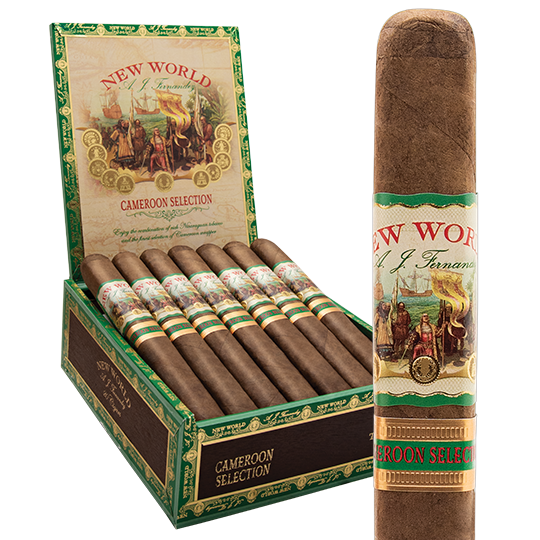 Over the past decade, he's created so many huge hits that all you have to do is to say that it was made by AJ and people line up to buy it. So it's really hard to believe that he had never made a cigar with an African Cameroon wrapper before. Well, that's no longer true with the introduction of AJ Fernandez New World Cameroon.

This gem is clad in a genuine African Cameroon wrapper with the classic light brown color and a hint of green. What lies underneath is what turns the dial up. The binder and long-fillers all come from AJ's own farms, with the liveliness accenting the sweet spice of the wrapper. You'll find notes of cedar, nuts, coffee, a hint of anise and sweet spices that brighten up the finish. AJ has mastered just about every kind of cigar tobacco imaginable. See what he can do with Cameroon with AJ Fernandez New World Cameroon. 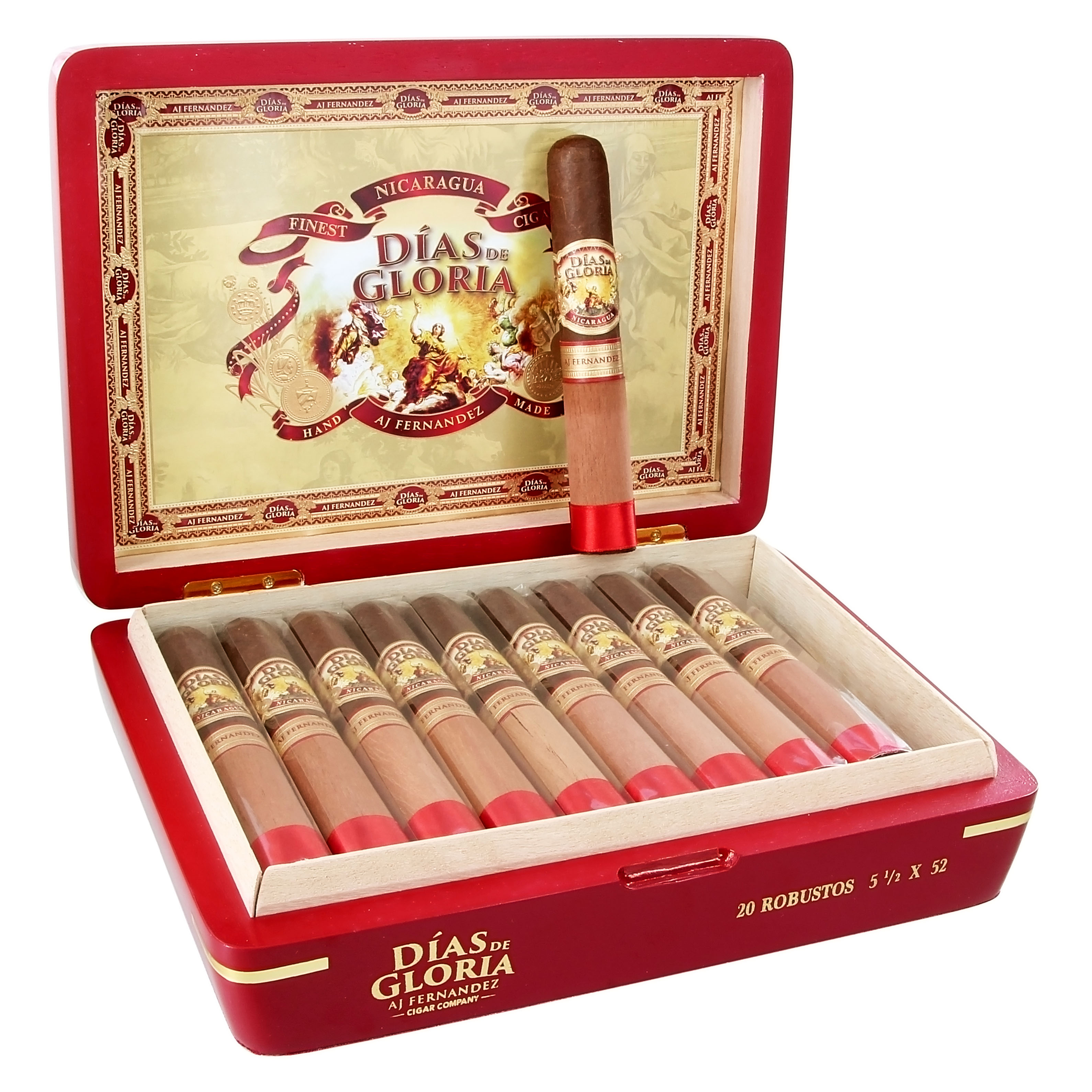 Cigarmaker A.J. Fernandez wants to pay homage to an idyllic time he believes were the glory days of Cuban tobacco—preCastro Cuba. His upcoming brand, Días De Gloria or “days of glory,” will be shown at next month’s IPCPR trade show. It’s a nod to this romanticized period in Cuba’s history before the Revolution, although the new cigar contains no Cuban tobacco. Rather, it’s made up of aged tobacco from four of Fernandez’s oldest farms in Nicaragua: Finca los Cedros, La Providencia 1, La Lilia and La Soledad. All four of these farms are located in Estelí.

“These are the four oldest farms I own,” says Fernandez, “and I’ve been setting aside tobacco from each farm and aging it for years for this blend. I want everyone to enjoy it like the glory days of old Cuba.”

According to Fernandez, some of the tobacco in the blend has been aged for up to seven years.