Three bands cover almost the entire Rocky Patel Sixty Robusto. The cigar is a celebration. Sixty shines prominent in Gold on the foot wrapper. Sixty 1961-2021 to celebrate Rocky Patel's birthday. After sliding off the foot wrapper, the oily San Andres wrapper glows in the sunlight. 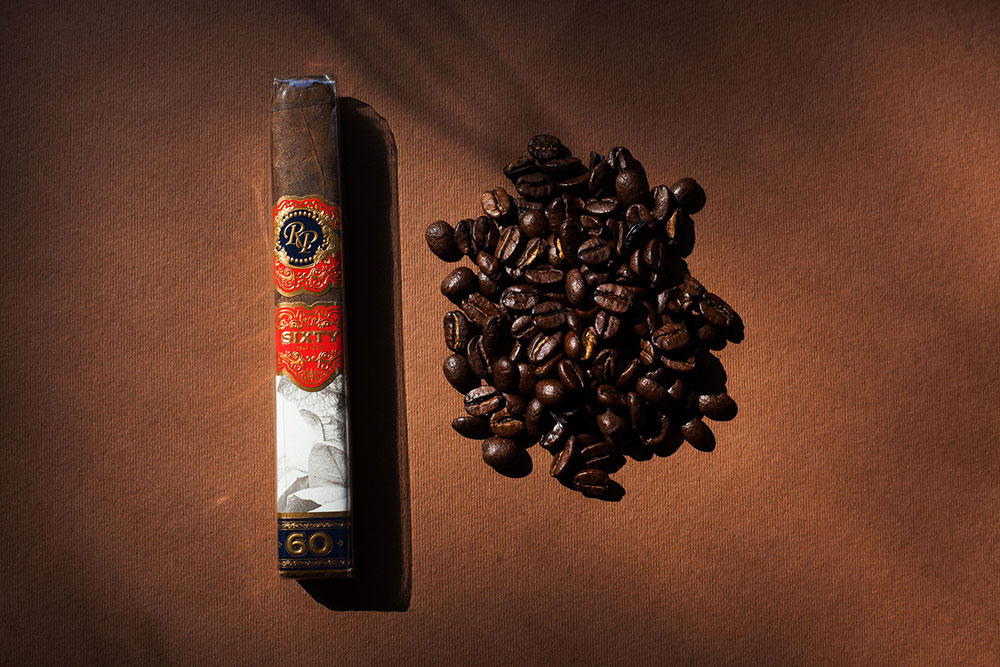 Lighting up a Cigar

Things like what you eat before smoking. What drink you pair your cigar with, and what time you choose to smoke. Wine is easier. A wine offers bundled flavours and tastes to identify. But when it comes to smoking and pairing, the experience is personal. A cigar is a celebration, and each smoke celebrates unique flavours and tastes.

Champagne is one of the best wines to pair with a cigar. It is elegant with a fresh component that lifts the cigar character. South Africa produces many star MCC wines perfect to pair with your cigar. 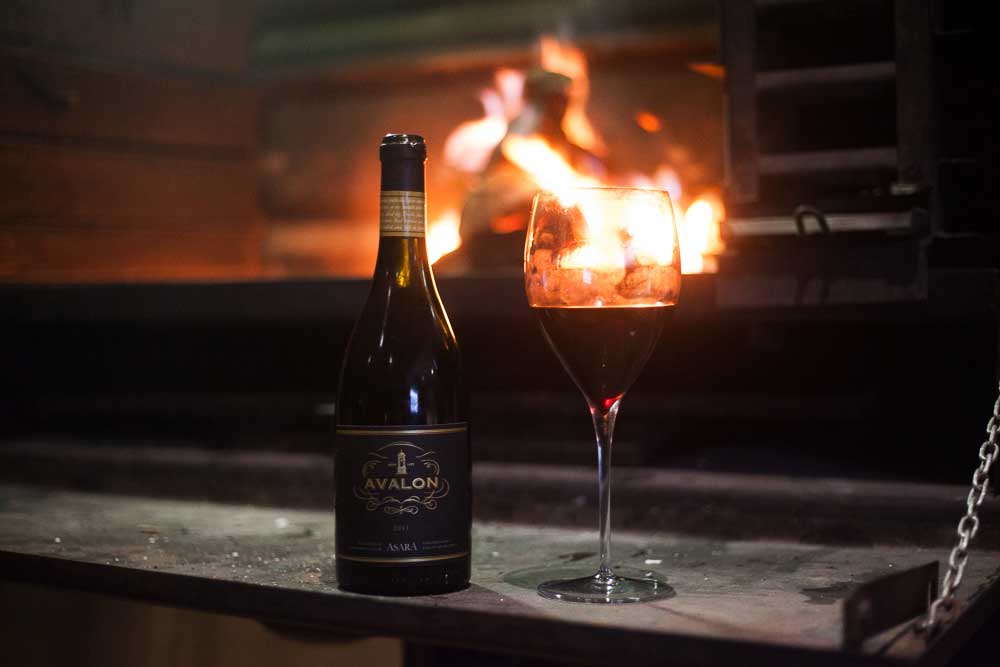 The Rocky Patel sixty cigar is box-pressed. Three bands cover the oily wrapper until you slide off the foot wrapper to reveal the Maduro wrapper. The wrapper is dark brown with an oily sheen.

Once the cigar is out of the cellophane, I pick up scents of dark roasted coffee beans, smokey moisture and hay. There are cooking spices, smokey tobacco barn and hints of barbecue aromas. 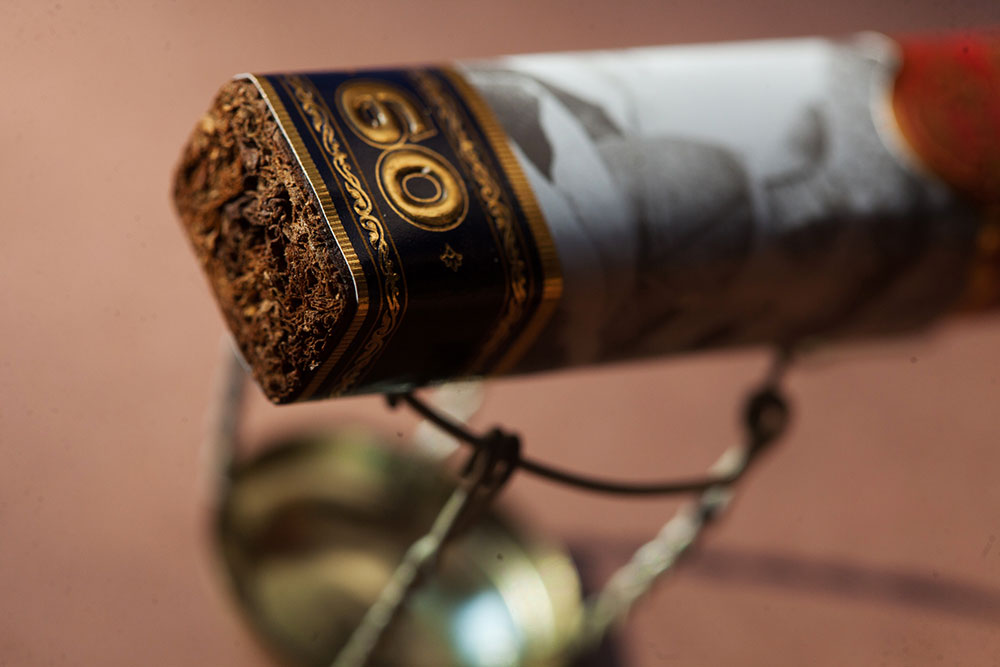 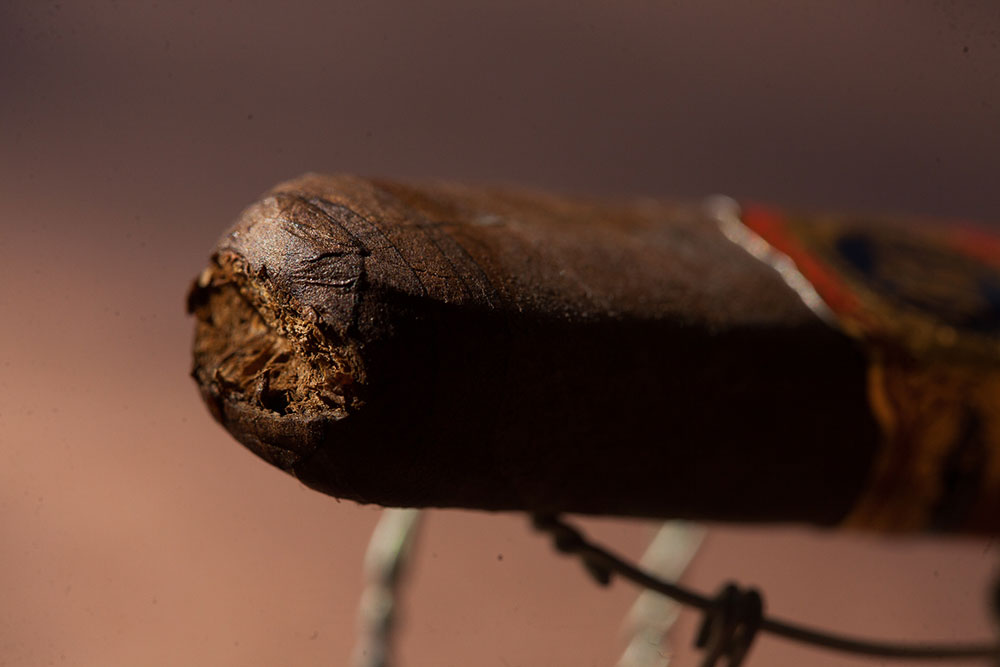 Like the dry draw and aroma, roasted coffee flavours fill my palate. I taste dark chocolate, aged tobacco and matured malt flavours. The taste of savoury slow-roasted lamb lingers on my palate. The draw is light and the flavours are complex.

Espresso is a perfect pairing with the Rocky Patel Sixty. The bold flavours of the coffee and cigar blend into smooth roasted flavours. 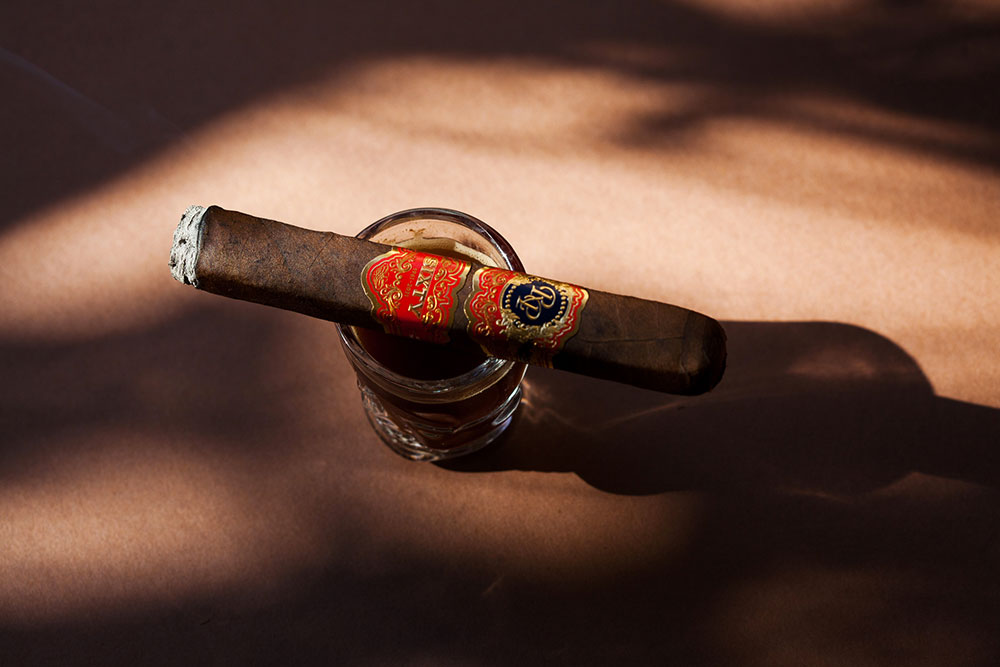 It is a slow smoking cigar. The burn is even while the ash dropped quick from the first light. The construction is tight with consistent coffee flavours during the smoke. The burning tobacco fills the air with smokey barbecue and roasted coffee scents. Its a wonderful tobacco aroma.

The whiskey bourbon flavours are salty with orange citrus. The bourbon lifts the cigar spice. The bourbon and Rocky Sixty have tastes of Orange rind with barbecue spice flavours. 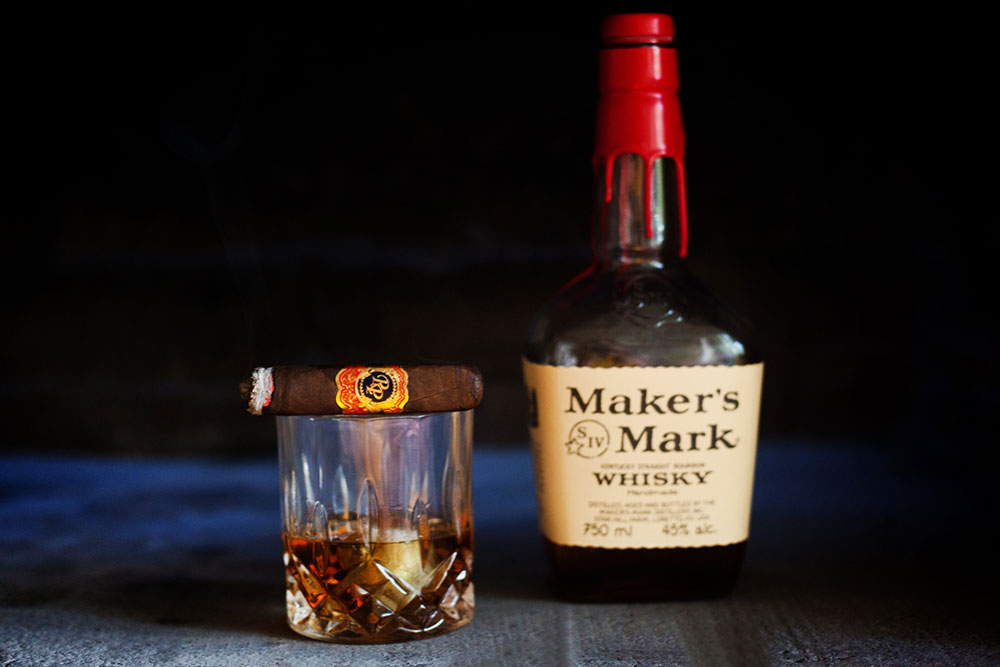 The cigar releases plenty of smokey caramel and cocoa flavours towards the middle. I taste dark chocolate fondant. Smoking the Sixty Robusto makes me think of luxury chocolate with coffee liqueur. The chocolate melts into your mouth as you bite into the chocolate to taste the liqueur flavours.

Click to link to light up the Rocky Patel Sixty 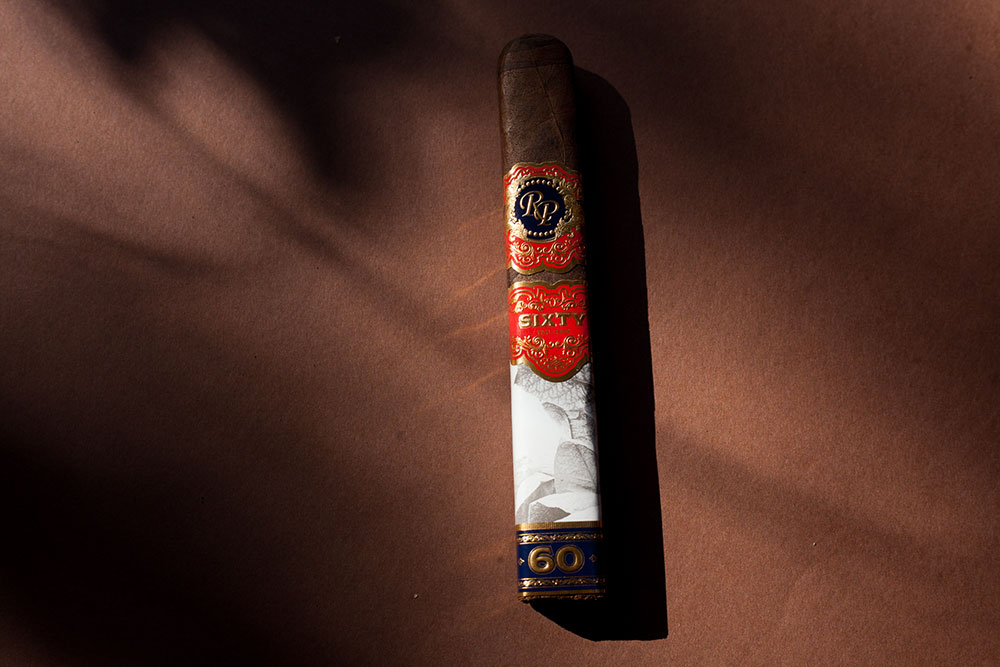 The Rocky Patel Sixty. Rocky Patel's Sixty is a cigar unlike anything rolled before. Quality comes with age. Passion for premium cigars and 60 years of life blend to release the refined aged cigars. AGED 2 YEARS Rolled at the factory in Esteli, Nicaragua. 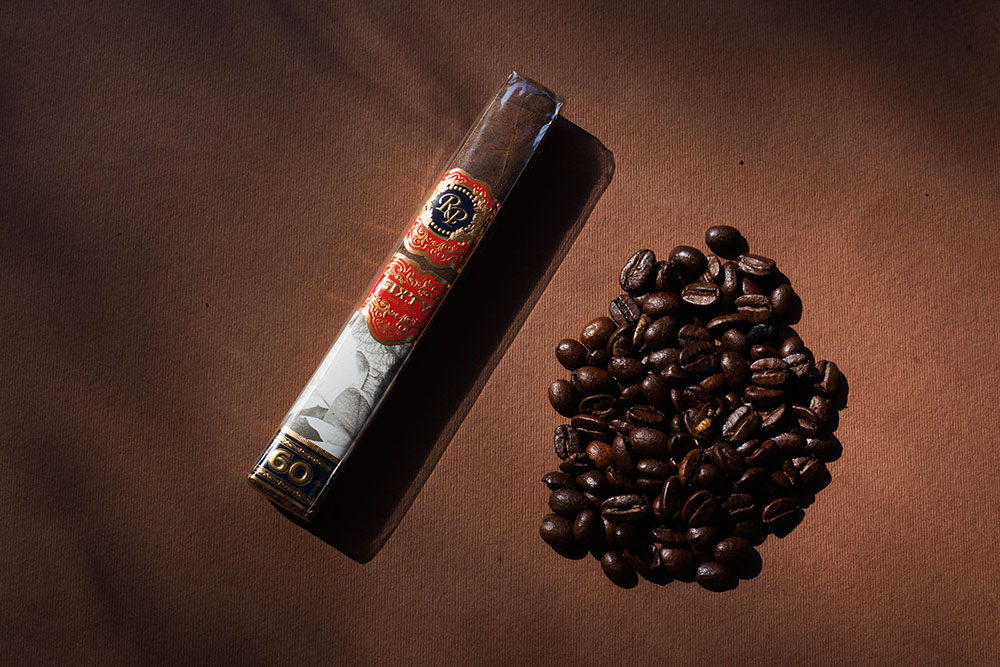 The sixty is a big rich, decadent cigar. Many complex and character flavours release while you smoke. You can buy a handmade red numbered Sxity cigar humidor.

In the early 1990s, the premium cigar market began to change. Rocky Patel lived and worked in Los Angeles as an entertainment lawyer. He developed a passion for cigars while smoking with celebrities in Hollywood. Rocky Patel received An opportunity to manufacture cigars. He invested, and the rest is history. The first brand, Indian Tabac cigars originated from Honduras. The cigars flourished on the American market.

Rocky Patel is always thinking about cigars. From packaging, marketing and improving blends. The cigars need to be exceptional. The product needs to sell itself together with valuable partnerships. Rocky Patel travels often connecting with enthusiasts and retail partners. 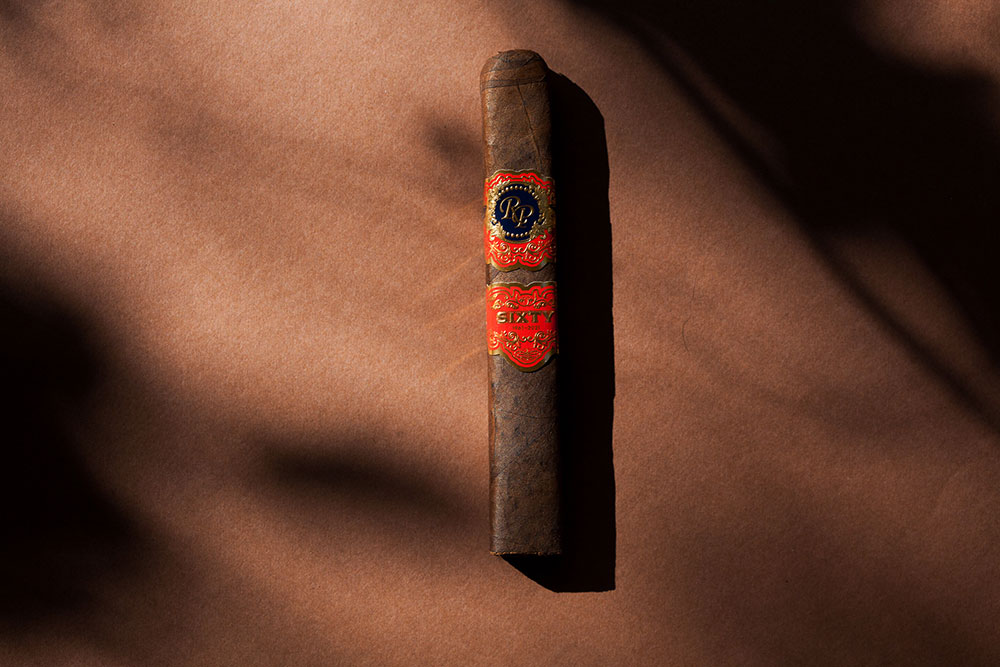 Rocky Patel is one of the hardest working people in the Industry. He is a traveling marketing persona sharing his contagious enthusiasm. The time on the road wins over new customers and relationships for the brand.

Maintaining a consistent presence as a brand is essential. But so are production and blending details. The team aspires to create complex cigars by blending tobaccos from various regions. Rocky strives for consistency and an emphasis on quality control. The factory teams do in-depth inspections of every cigar. 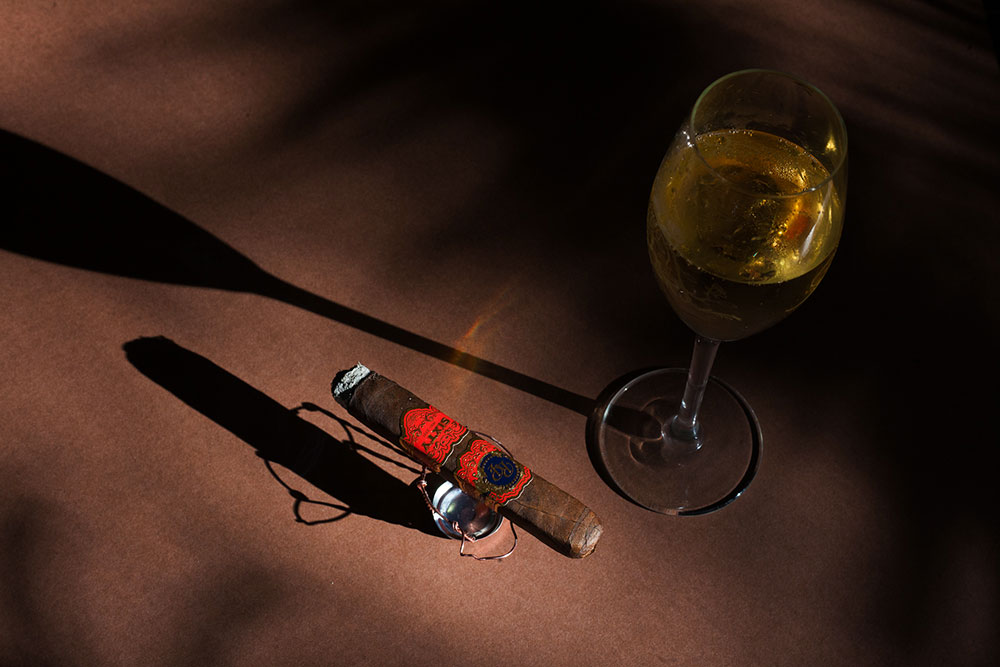 The Era of Rocky Patel Cigars 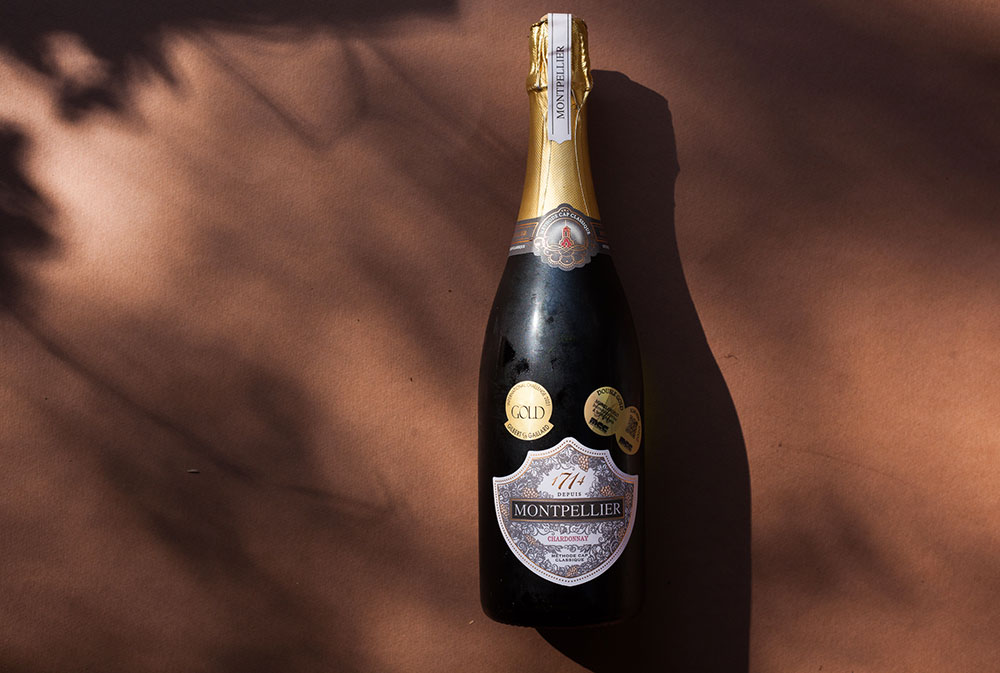 After the death of Jean Imbert in 1723, Montpellier changed hands several times. Descendants of Jacques Theron acquired the farm in the 1880s. The farm stayed in the Theron family for the next 100 years.

In the early years, Montpellier was a grazing cattle farm. The owners planted the first vineyards between 1815 and 1820. It was for private use. 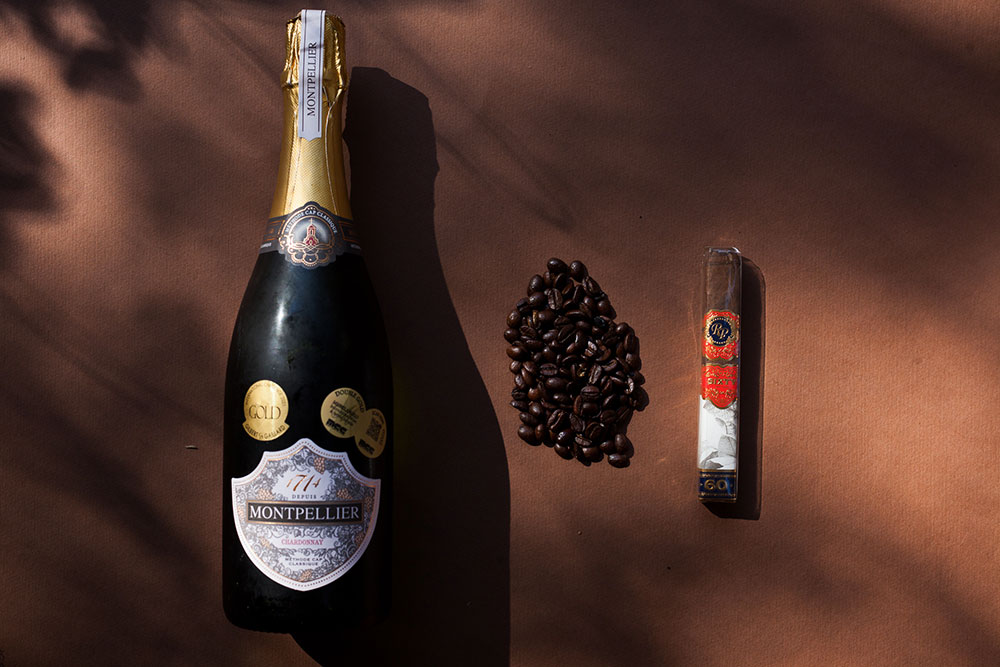 In 1884, Hendrik Theron took over the farm and began planting in earnest. The first cultivars consisted of Sémillon, Riesling, French grape and Cinsaut. In 1945 De Wet Theron inherited the farm and took over the management. He started working to create high-quality wines. Out with the reds to plant white grapes. His focus was white wine production. He began experimenting to improve production.

He minimized oxidation by using CO2 to replace O2. The juice of the grapes needs cooling and regulated temperatures during fermentation. He implemented cold running water to cool the tanks during the fermentation process. In 1967 he imported active dry yeast into South Africa. On 2 December 1967, 1000 bottles of Riesling were hand-bottled. The bottles matured for four years.

The 1971 matured Riesling became the first wine to receive a Gold classification. Later, De Wet Theron added Gewürztraminer , Rhine Riesling and Chenin Blanc. A handful of those vintages still exist. They have since turned into a honey-coloured liquid gold. 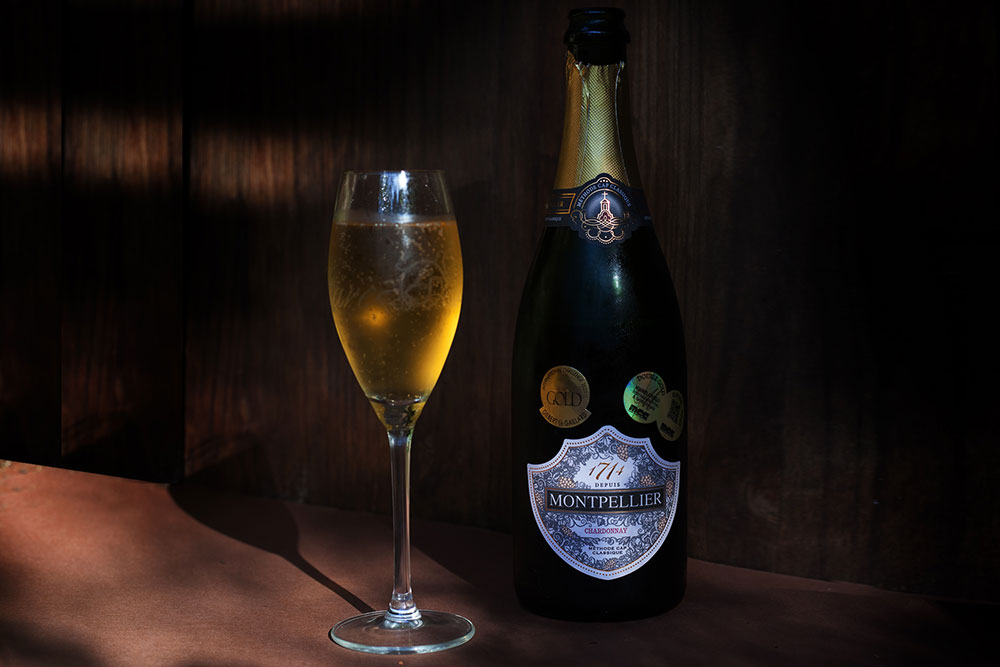 In September 1969, a devastating earthquake levelled the original Cape Dutch homestead. De Wet Theron restored the structural heritage which remains today. In the years that followed, Montpellier suffered neglect and fell into disrepair. But in 2001, advocate Lucas van Tonder saw its beauty and potential. Lucas purchased the farm and started with restorations.

Montpellier's homestead is now a National Monument. The home is an outstanding example of Cape Dutch architecture. Inside, the rooms have Cape Dutch furniture and modern amenities. Visitors are welcome and invited to experience a Cape Dutch home tradition. 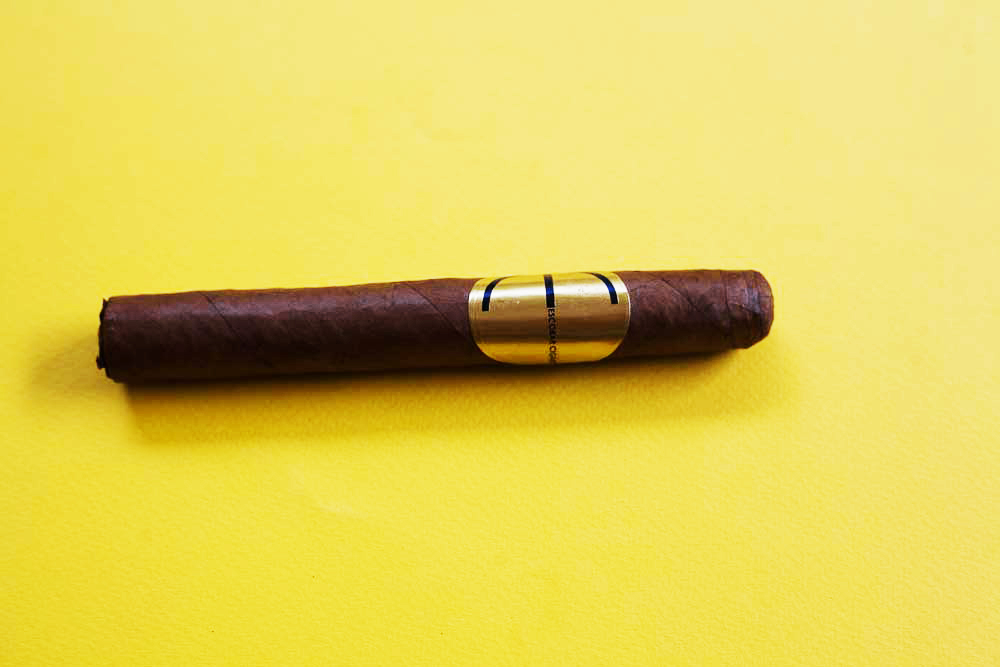 Wine is poetry in a bottle.

.Montpellier has been producing award-winning wines since the 1890s. Surrounded by three imposing mountain ranges, the Tulbagh Valley offers a unique climate. The climate is ideal for viticulture. In Tulbagh, the summer nights are cool and fresh due to the surrounding mountains. Occasional summer snow caps, often as late as Christmas, can occur.

A distinctive terroir and variety of soils enable the production of a diverse range of wines. Montpellier is part of the Tulbagh Wine Route known for award-winning wines. The farm's highest accolades came from the MCC. The farm received Double Gold for the MCC Brut 2010 and MCC Rose 2011. 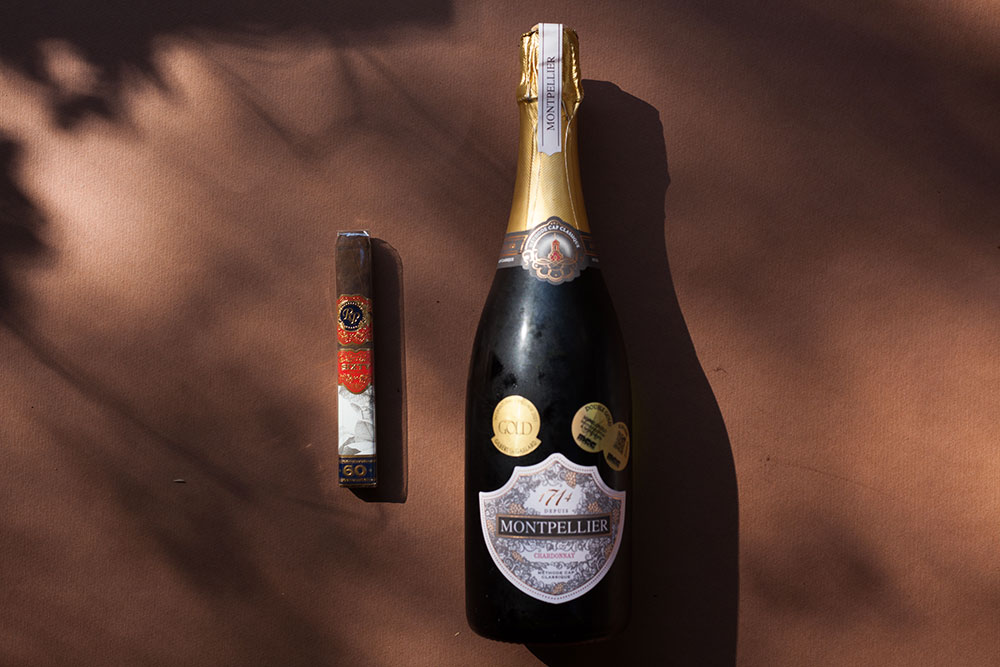 The Colour is a deep yellow-orange. 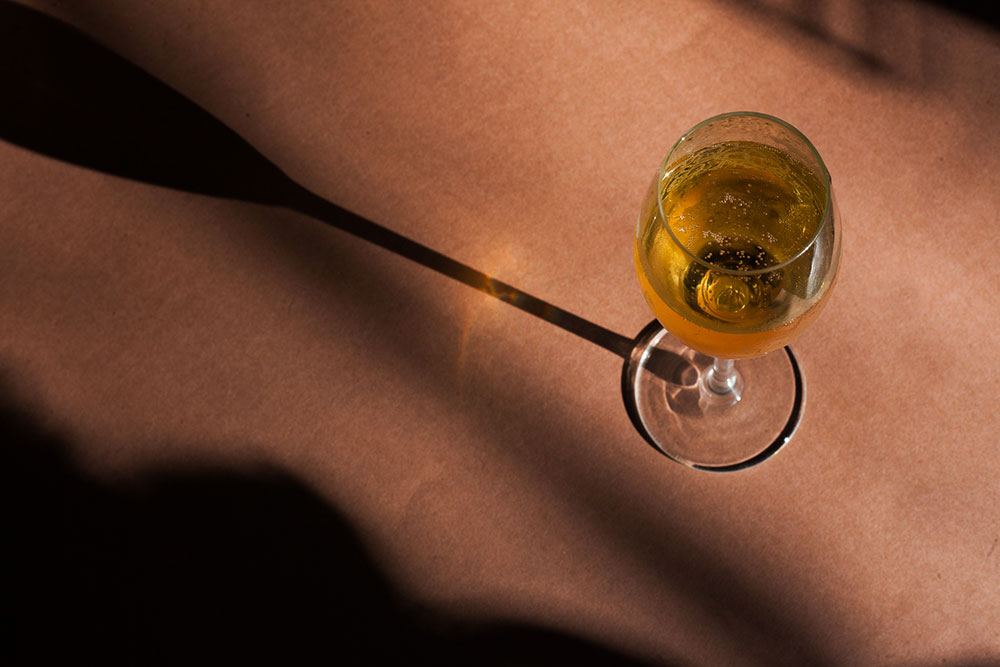 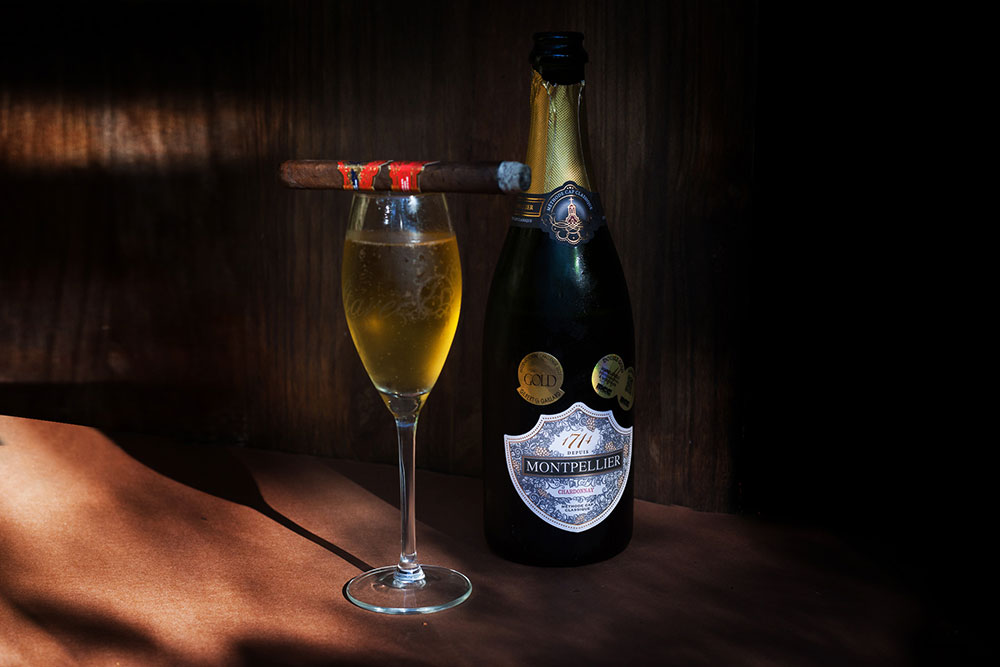 What signifies a celebration more than a great cigar and popping a bottle of bubbles? I would say a few things. Sip on the sweet honey and orange flavoured bubbles. Puff on the sixty to the taste dark roasted espresso and chocolate. The cigar has savoury notes present. The prominent flavours are sweet honey, orange, coffee and cocoa. 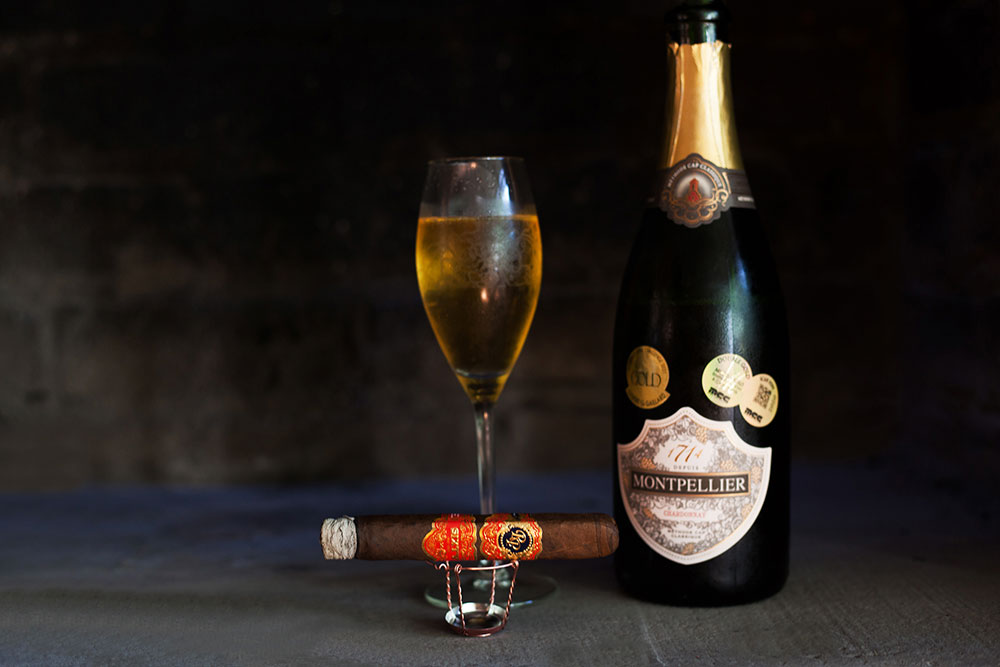 I mentioned luxury chocolates and liqueur, roasted coffee and lamb roast. To put the flavour combination into one. I would say it is Creme Brulee with coffee liqueur. It is a refined pairing. The rare blend of aged tobacco smokes unique. 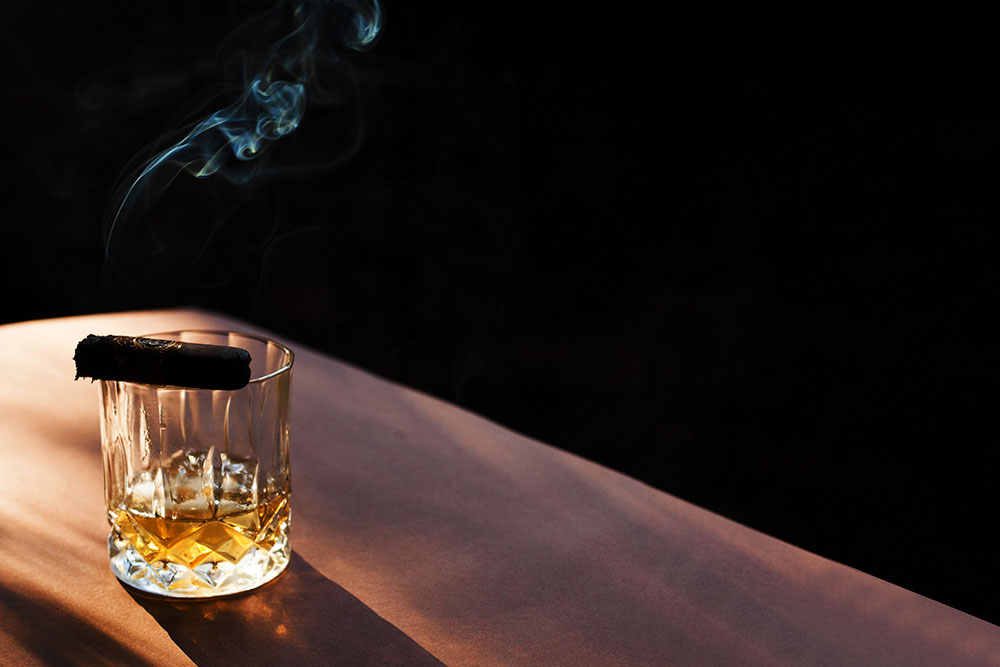 Would I smoke the Sixty again? Yes, for sure. Again and again. The next one try should be the Toro. It is a smooth smoke with subtle savoury notes. The roasted coffee tastes are present during the cigar evolution. I kept tasting roasted lamb spice on the retrohale.

The aged maturity is prominent. The aged tobacco makes the Robusto creamy with a medium to full smoking experience. The Bubbles and cigar are a magic pairing. It is a celebration and the perfect compliment.

The pairing has creme brulee, smokey caramelized crust, and orange liqueur flavours. It is a rich and rewarding pairing. Aged maturity, smooth and rich until the end.

A Cigar and Bubbly Celebration.

Click the link to experience the Rocky Patel Sixty 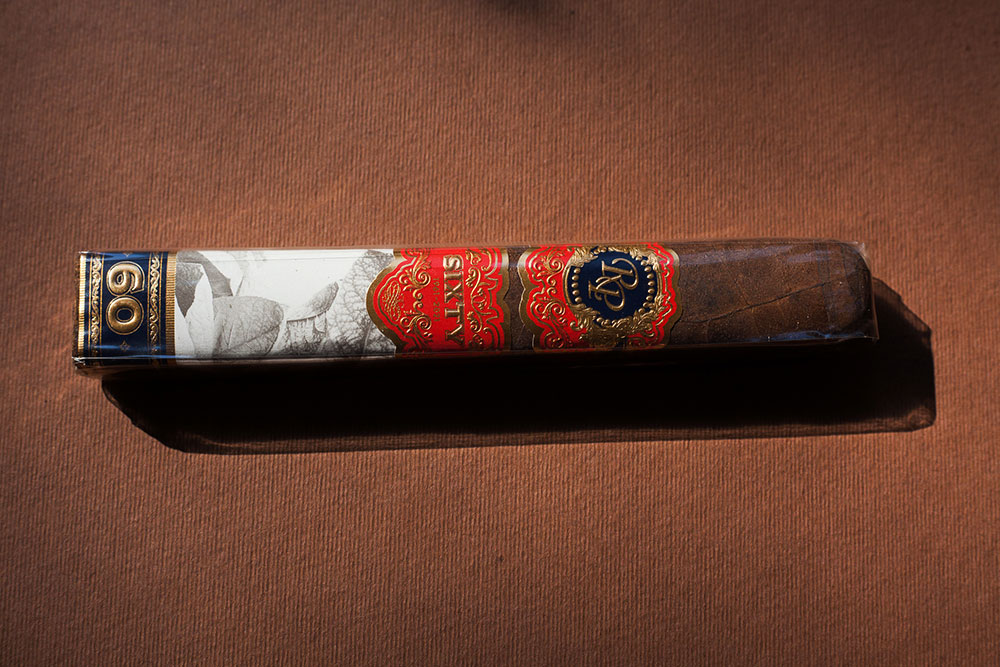